Authorization in 8base uses a robust roles and permissions system that lets you securely control access to any data resources in a workspace. You use the roles and authorization system to control what users (with roles) are able to access and who is authorized (has permission) to do what.

Roles in 8base are best described as a single identifier for a collection of permissions. A user can have one or more roles associated with their account, each of which may allow them to perform zero or more actions.

The Roles Manager can be found in a given workspace by navigating to App Services > Roles. In this view, you can find all 8base and customer defined roles associated with the current workspace. By default, all workspaces are created with two default roles; Administrator and Guest.

Note: all roles are fully editable. 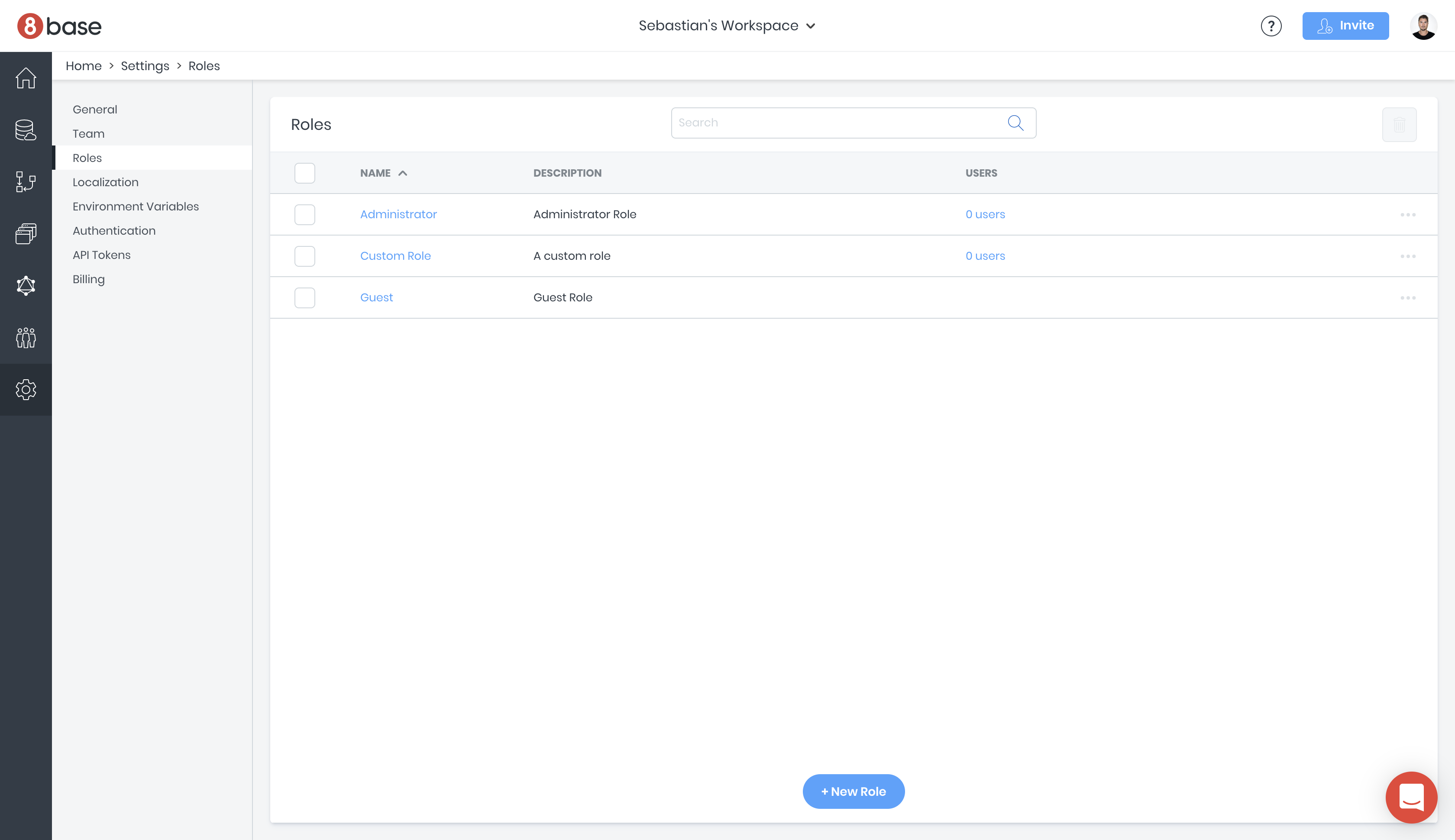 Creating a new custom Role is simple. In the Roles Manager view (App Services > Roles), click the + New Role button at the bottom of the screen. Add a unique name (required) and a simple description before clicking Add Role. You may optionally assign users to the new role in the create form. However, this may also be done at anytime in the future once permissions have been specified. 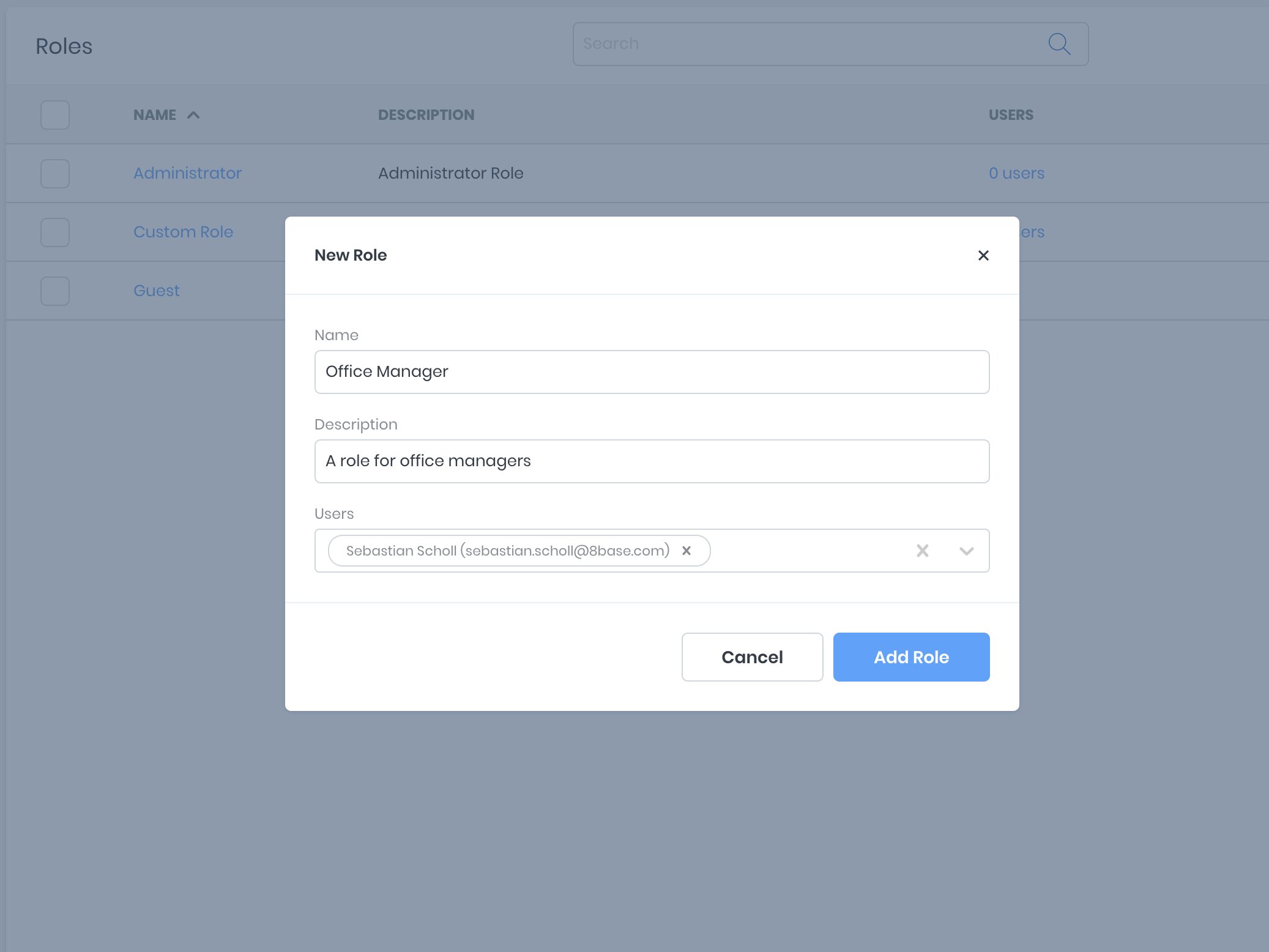 To delete a role, toggle the ellipsis toggle located at the end of the roles table row. Click the Delete option and then confirm your action in the modal.

Permissions in 8base refer to the specific actions a user is authorized to take. These permissions are defined under a Role, which is then attributed to a user. For example, a permission that authorizes a user to read Posts may be defined under the Guest role.

In the Roles Manager view (App Services > Roles), click on the name of a Role whose permissions you'd like to update. You'll be taken to a view containing three tabs; Data, Apps and Roles.

Lists all the data tables in the current workspace. Each table exposes the ability to set Create, Read, Update, Delete (CRUD) and Field permissions using simple controls. If fine-tuned permissions beyond CRUD actions are required, Custom Filters on tables and Custom Access on fields can be implemented.

Allows toggling of role permissions for 8base Management Console administration, such as Schema Management, Workspace Settings, Team Administration and more. 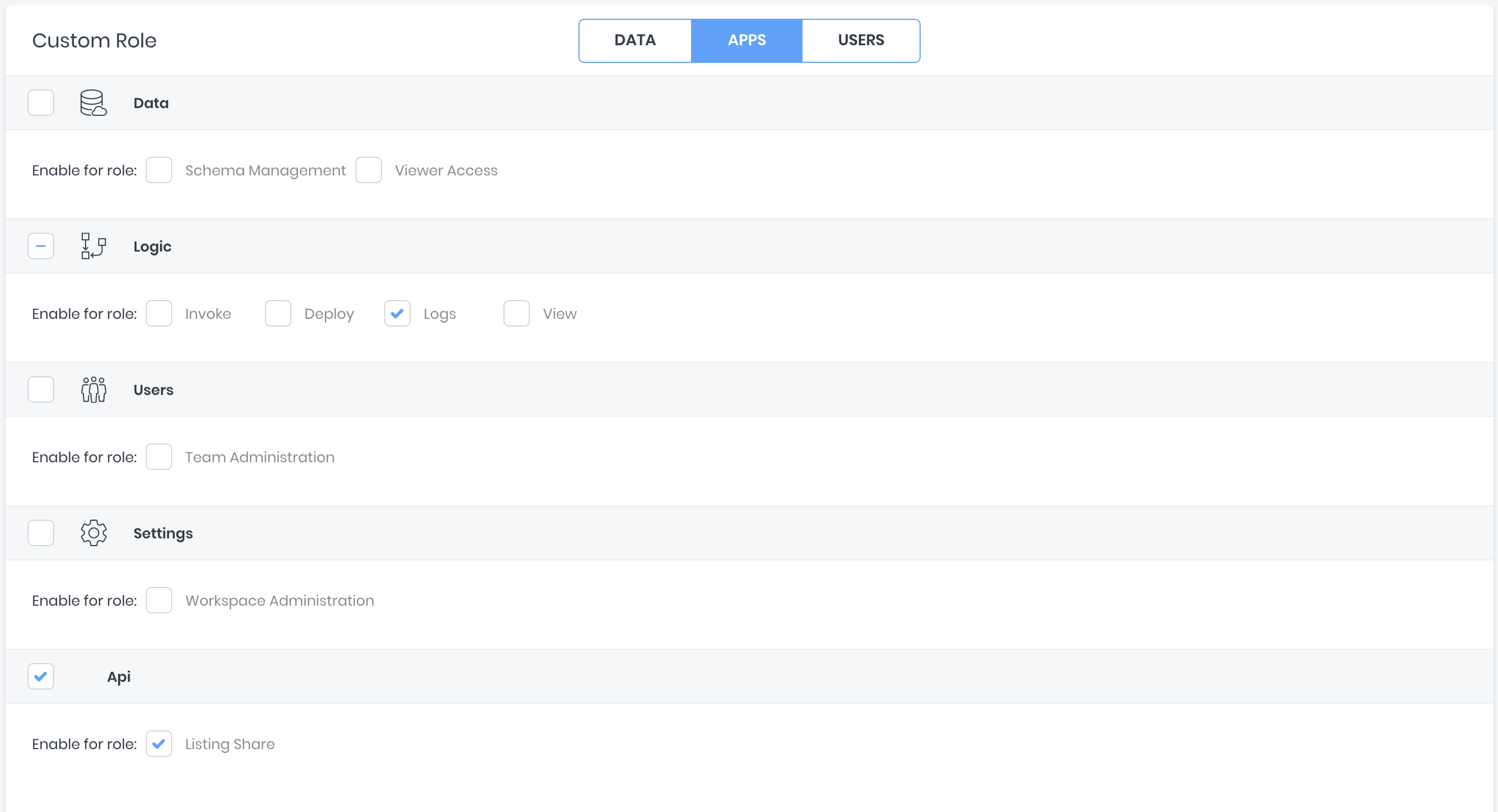 Lists all users that hold the selected role and allows for easy role assignment and de-assignment to specific users. 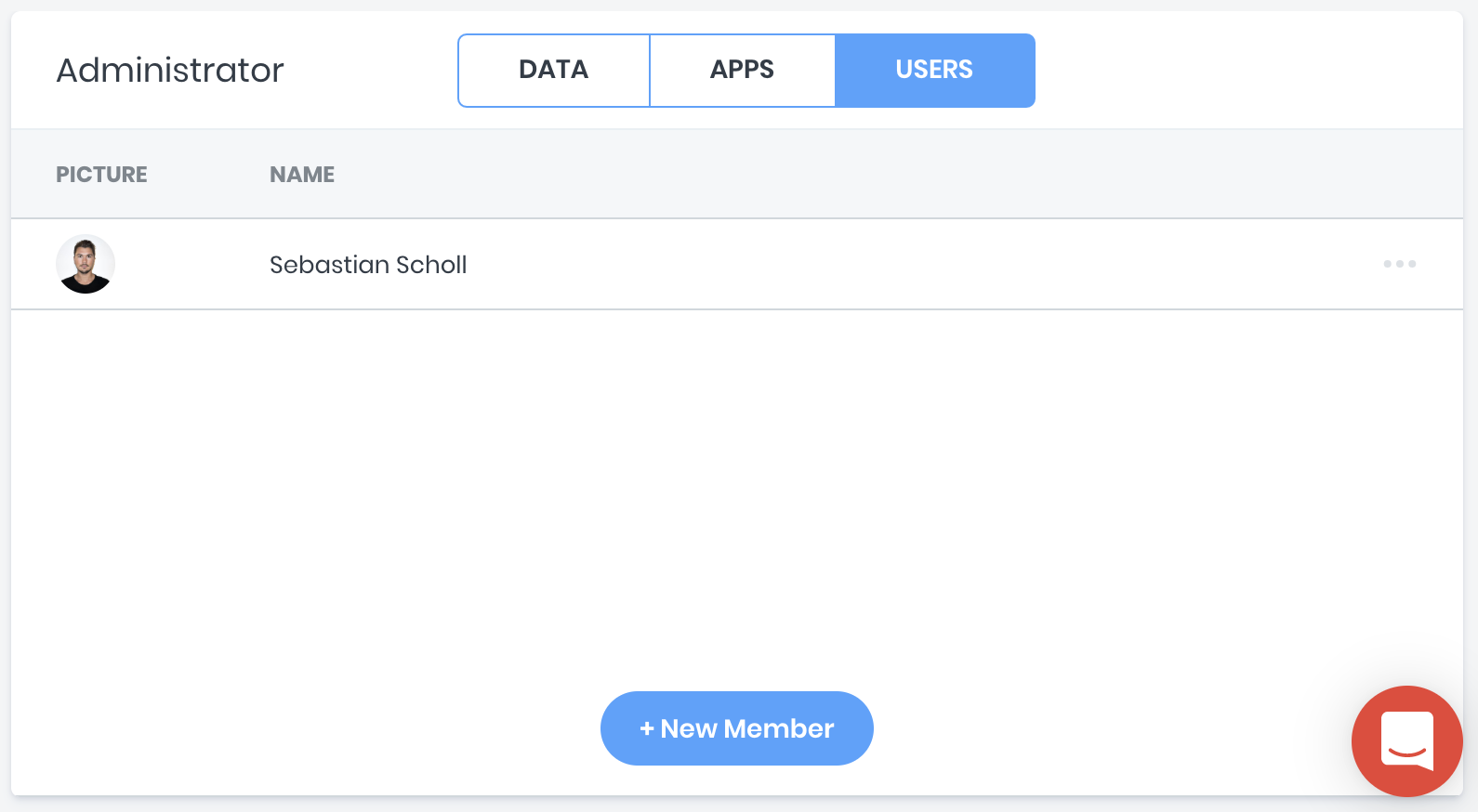 API Tokens can be created in Settings > API Tokens. Note that you can only copy the token on create! So make sure to copy the value and store it securely. The roles associated with the token will enforce which permissions the token has. API Tokens by default have no permissions. 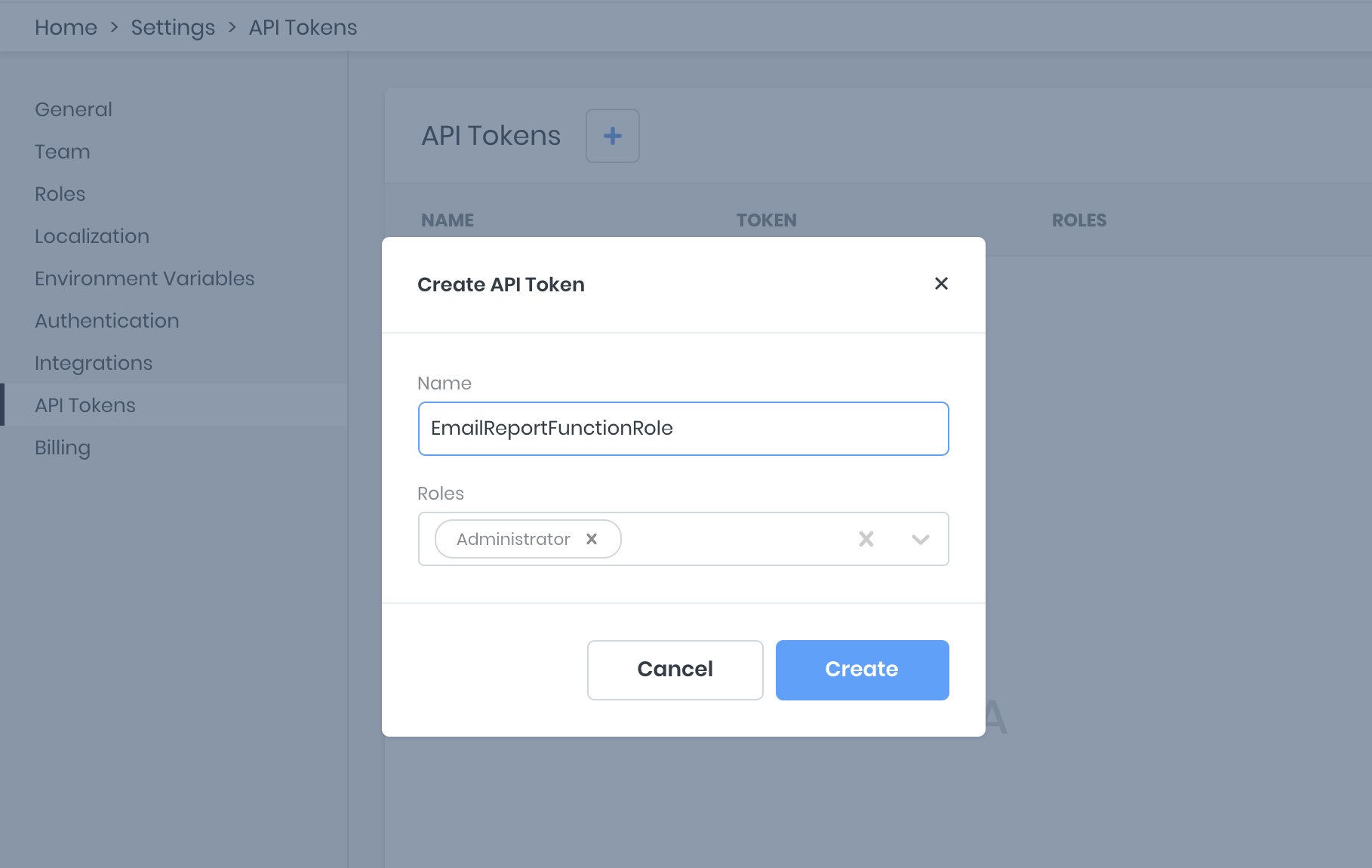 Custom filters are applied to the Read and Update permissions of any role, making advanced scoping of the records possible. These filters get constructed using JSON and mirror table specific GraphQL filter types.

New roles, by default, don't allow the logged in user to read or update other user records. To enforce this, a custom filter is applied to role's read and update permission in regards to the Users table.

8base stores media (videos, documents, images, etc...) as records in a system table called Files. This makes it necessary for media to be scoped, by default, to the following constraints:

These constraints get enforced using the following filter.

There are 3 dynamic variables that can be used when creating Roles. They are:

• __requestingApiToken - The API Token being used to authenticate the request.

The best way to write custom filters is by using the API Explorer in conjunction with Variables. The filtered result of any GraphQL query is the scoped record set that can be expected by using the same filter as a role's Custom Filter.

For example, imagine that a workspace has both Posts and Authors tables. In the API Explorer, an 8base user wants to query all Posts that belong to Authors under the following criteria:

After successfully running this query, the user decides that the filter should be utilized as a custom filter for post updates. That way, only editors would be able to update posts that belong to authors from their own company.

To accomplish this, the value of the filter key can be pasted into the Custom Filter section of the desired role's update permission.